LIFE ON THE WATER

This is your haven on the water.

Albemarle is an authentic coastal community. It occupies a very special place along the deep blue Albemarle Sound and in the hearts of those who call it home. The water gives life a special energy here, and there are infinite ways to enjoy it. 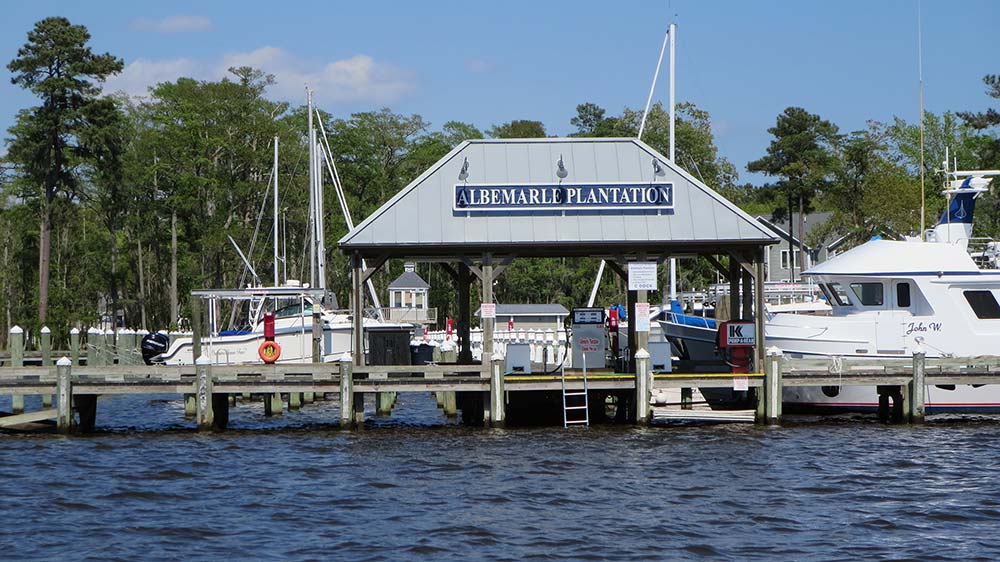 Welcome to our private, deep-water marina where sails billow and laughter floats.

The Albemarle Plantation Marina is one of the largest private boat basins on the Eastern Seaboard. And its size is matched only by its hospitality. Our expert staff is eager to help beginners and experts alike enjoy a day on the water. To those who love the boating lifestyle, (and those who’d like to discover it), welcome—you’ve found paradise!

Endless adventure begins here. Take an easy jaunt and explore the historic towns of Edenton and Elizabeth City. Set out for a day on the Intracoastal Waterway or the Outer Banks. Feeling lucky? Head right out into the Gulf Stream, home to some of the world’s best sport fishing, and cast a line. And when you return with a prize catch (or just a tall tale), cap off your day on the water by raising a glass with friends at our own Dockside Café. Enjoy dinner on the deck and watch the boats and fellow adventurers return to port as the sun sets.

The Marina at a Glance:
• Full-service, deep-water 166-slip marina
• One of the largest private boat basins on the Eastern Seaboard
• Effortlessly accommodates boats up to 60-feet in length
• Outfitted for both fresh and salt water boaters

Water is big at Albemarle

This immense coastal estuary is the second largest in America, outsized only by the Chesapeake Bay, and outshined by none. Its size is impressive, but the joy and freedom it gives Albemarle residents is limitless. Connectivity is key here—just like our ‘straight shot’ drive by car to Virginia’s Tidewater region, routes by water let you get anywhere on the coast, easily.

The Sound is part of daily life here. We kayak, canoe, swim and ski in its warm waters. We set sail upon it. We enjoy its bountiful fishing and crabbing. We gather with friends at Marina Park and are inspired by its peaceful waters. We dream about the next adventure it holds.

Life in Our Active Marina Community

Kayaking, paddleboarding and canoeing
Powerboating and sailing
Fishing and crabbing
Swimming and water-skiing
Tournaments, events and fun: Fishing Tournaments, weekly Yacht Club Sailboat Races in spring and fall
Osprey Yacht Club – many of our residents are members and enjoy sharing their passion for the water
Walking and biking the raised boardwalks around the Marina
Enjoying a great meal by the Marina at our own Dockside Café
Expert staff to assist experienced and new boaters alike

The Albemarle Sound shines along the coast of North Carolina at the confluence of a group of rivers, including the Chowan and Roanoke. It is separated from the Atlantic Ocean by the famed North Carolina Outer Banks at its eastern edge.

HISTORY OF THE SOUND

The Albemarle Sound has been a prized locale for centuries.

In 1586, the first European explorers voyaged up the fifty-five mile length of the Albemarle Sound. In the coming centuries, its advantageous waters and fertile landscape would attract settlers, traders and adventurers alike. It seems a lifetime since its days as a busy colonial trading port, welcoming merchant ships loaded with spices, silks, and sugars from the West Indies. And yet, we still feel echoes of the rich history and magical allure of this place.

In 1663, Albemarle Sound was made part of the Province of Carolina by King Charles II of England and given to eight Lords Proprietors. One of these royal beneficiaries of the sound was its namesake, George Monck, First Duke of Albemarle—also known as the Earl of Torrington, and Baron Monck of Potheridge, Beauchamp And Teyes. Fortunately, our beloved Albemarle Sound was named only for his highest title!