EARLY HISTORY OF THE AP MARINA: As Recalled By Ellwood “Woody” Perry

EDITOR’S NOTE: Woody Perry was a lead in the development of the parcel of land and its waterfront that is now Albemarle Plantation. He and R.G. “Pete” Bosher were the investors and developers. As Soundings experienced difficulty in locating information to accompany the photo taken in 1989 of the shoreline in the very early stages of AP development, Tony Edwards offered to interview Woody about his recollections. Here is his report.

Woody said they first applied for a permit to build a marina at the Plantation in 1989, having always had a golf course and marina in mind as the primary amenities at AP. This was no easy or speedy process. The permit-ting body, North Carolina Coastal Management, had historically been very protective of the inland coastline for which it was responsible.

The marina design was produced by Carolina Bench-mark Co. out of Greenville, NC. The plans and documentation, their review, and the discussion and negotiation took about three years. And Woody stated that the cost was an estimated $500k before approval was eventually granted.

So, when permits to build were finally approved (and critical to approval was the absence of required dredging of the bay chosen for the location), Woody and Pete Bosher engaged J.R. Milligan and his boss at the time to do the construction work. The permit allowed a window of 18 months from start to completion. It was a calculated risk, as the investment was sizeable. Mr. Bosher was prepared to put up the lion’s share of the cost, even though they knew there were still some restrictions to access via the Yeopim River and Yeopim Creek.

Back before Hurricane Hazel in October 1954, there had been a small sandy island at the mouth of the Yeopim River called Batt’s Island. Hazel demolished this island but left a shallow sandy area that would restrict access to the new marina. Despite knowing this, Mr. Bosher and Woody agreed the risk was worth it and began the process of applying for a dredging permit to provide the channel depth necessary for boats to use the marina in the future. The dredging permit took another two years to obtain! But they got that too and got the necessary dredging done.

The construction of the marina has a few colorful stories attached to it….

J.R. Milligan had an experienced and detail-oriented crane operator named David Kirkland. Woody said Kirkland’s crane was an antique, but with it he was absolutely precise in the positioning and alignment of the critical support pilings. But his work on the property came with a lot of “cussing,” as Woody described it. So much so, he was overheard by a golfer on the course who took offense and reported it…. Woody took it upon himself to address the report directly with Mr. Kirkland only to be met with a torrent of “cussing” himself! On informing Mr. Bosher of his ineffective attempt to curb the crane operator’s verbal excess, Pete said they had no choice but to carry on with Mr. Kirkland, as he was the only one around with the necessary experience and expertise to do the job.

The pilings originally selected for the job were quickly discovered to be far too short, because the bay where the marina was located has a very soft and silty base. This necessitated a most significant change to the plan and the cost. The marina, when complete, cost $1.3M. Woody said $300k of that sum was for the installation of the gas line and pump, which they knew was essential.

The construction team was small, just three or four workers on the project along with David Kirkland. But the project was complete just inside the permit’s requirement of 18 months. The exact date is not recalled.

I thanked Woody for his colorful recollections of the construction of our marina. 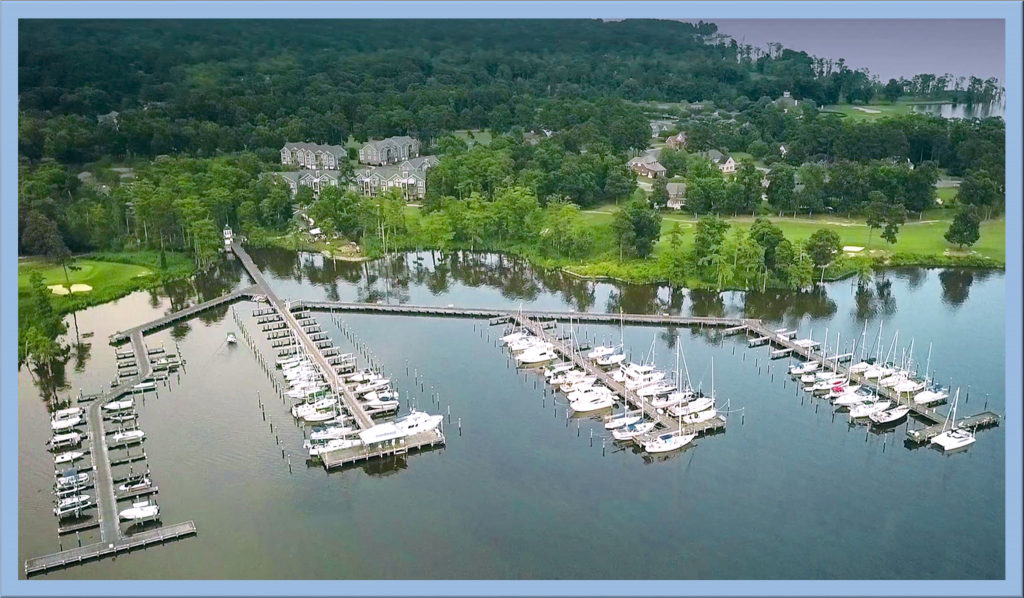