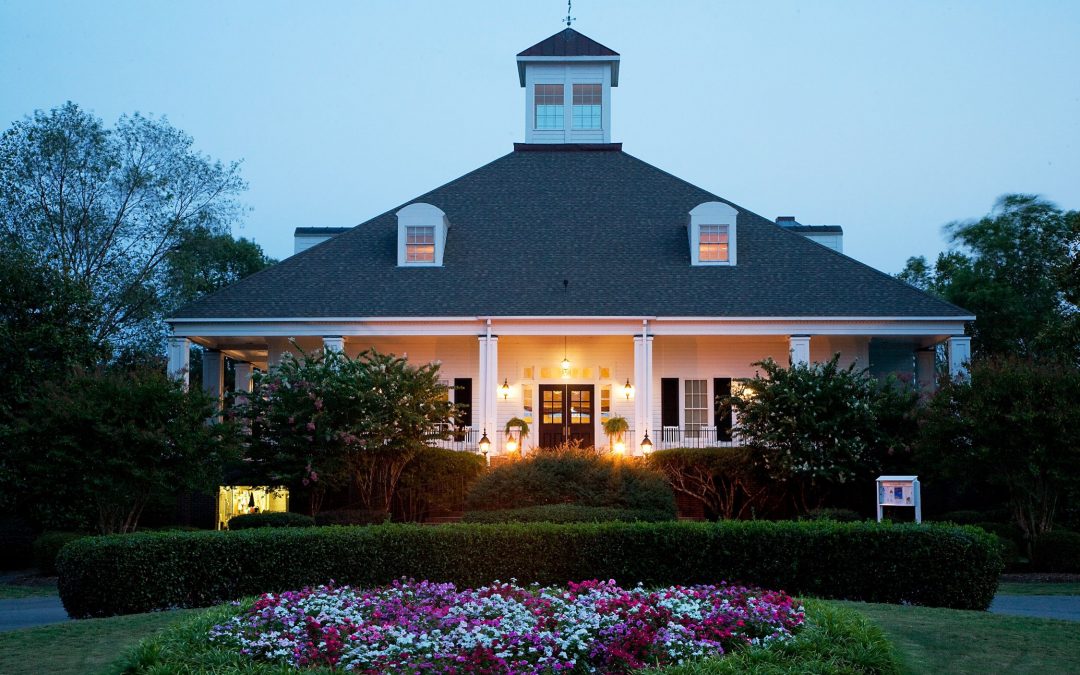 To many long-standing residents of Albemarle Plantation it doesn’t seem possible that 30 years have elapsed since our Clubhouse was built. The small granite plaque imbedded at the top of the entrance steps confirms it.

To celebrate this milestone, artist Alvin Mizelle’s painting depicting the dedication of the Clubhouse was unveiled at a January 12th reception in the Clubhouse, where it will hang permanently. The reception provided a golden opportunity to meet a number of notable personalities who played such a critical role in the development and realization of our Clubhouse and the wonderful Albemarle Plantation community in which it sits.

Lee Duncan, APPI General Manager, began the proceedings by introducing the noted guests to a fine gathering of residents. First was Alvin Mizelle, the featured artist of the evening, now a resident of AP who has lived in the Hertford area since 1977. Next, Lee gave a warm welcome to Dan Maples, the Sound Golf Links course architect, and his son Bradley, followed by Kitty Bosher, the daughter of R.G. “Pete” Bosher, AP’s original developer, together with Pete’s development partner, Elwood “Woody” Perry. The first architect of the Clubhouse, John Waller, was also in attendance. Mr. Waller is now 97 and still going strong.

The reception attendees gave them all a very warm welcome. Unfortunately, Helen Hunter, wife of baseball Hall of Fame recipient and long-time Hertford resident Jim “Catfish” Hunter, was not able to attend but sent her good wishes along with apologies for her absence.

Following introductions, Lee invited Alvin to address the audience, and the artist proceeded to give a brief background about the artwork about to be unveiled. He thanked Woody for the photograph of the ground-breaking from which he worked to create his painting titled Transition.

Annemarie Pomp, coordinator for all Clubhouse art exhibits, assisted Alvin in the unveiling. In the foreground the painting depicts the four primary participants at the Clubhouse dedication in 1992. The Clubhouse is a key feature of our AP community and has been an essential gathering place for the past 30 years. The assembled guests roundly applaud-ed Alvin for his wonderful creation and for his generosity in donating it to the AP community.
Woody Perry entertained the audience with colorful stories of his long and close association with the late Pete Bosher and the Bosher family and went on to describe how he and Pete were able to engage the renowned Dan Maples to design and build the golf course. Apparently, it involved a touch-and-go discussion and decision regarding the use of waterfront land.

He went on to briefly describe his involvement in initiatives now being taken to restore the town of Hertford to its former glory and to renovate some of its historic and unique places.

Dan Maples expressed just how pleased he was to be here to celebrate the 30th anniversary. He also described the course design-and-build as one of the most challenging but satisfying in his long career. He told everyone that his commitment, and that of his team, ensured that AP has a Dan Maples “Rolls Royce” course, and that he was very pleased to have his name associated with it.

Kitty Bosher graciously thanked the community for inviting her and described her fond memories of working for her father as his secretary in her early career. She reflected on the close and very warm relationship her father had with the then “young” man, Woody Perry. Kitty also shared her delight that John Waller was able to join the celebration of key players in the development of Albemarle Plantation. Kitty stated, “My father would be 105 now and how much he would have loved this celebration, over 30 years on from his original commitment to the idea that he and Woody Perry developed.”

Lee concluded the formal part of the reception by inviting guests to view the exhibit of many remarkable paintings by Alvin Mizelle currently hanging in the Clubhouse. Dinner followed.

Alvin Mizelle’s mavelous exhibit will be on display until Sunday, February 27th. Don’t miss it!