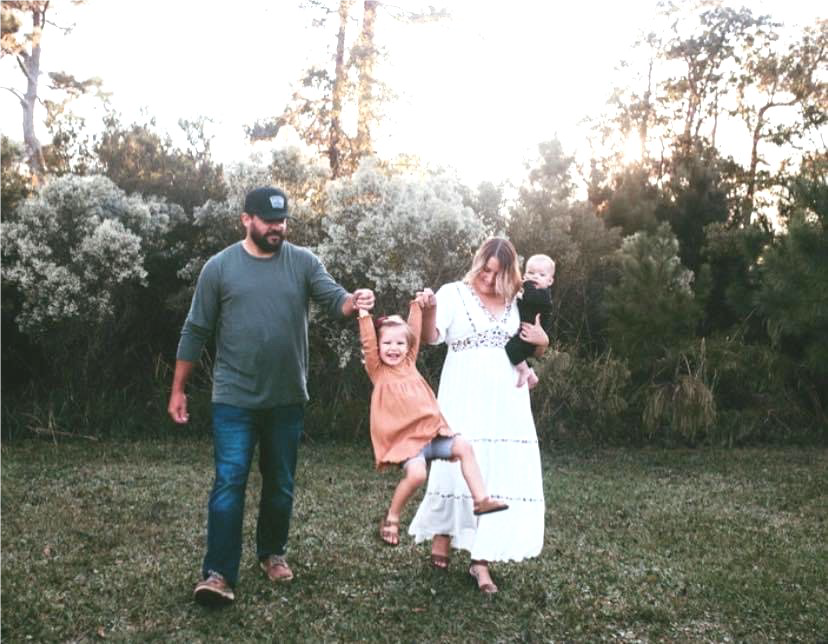 Rusty and Amber LaJoie recently participated in the Randolph Village Trick or Treat event with their two children, daughter Bradley who will be 3 in February and their son Elijah who is now seven months old. Rusty and Amber are part of a growing number of new residents who have small children, evidenced by the 31 preteen Halloweeners who graced the streets of Randolph Village this year. Although our community has historically been regarded as a retirement venue, Rusty and Amber are among a number of young families who have chosen Albemarle Plantation as the place to put down roots through home ownership. Here is their story.

Rusty grew up in the Chesapeake/Norfolk area of Virginia, and met Amber when he lived for a few years in State College, Pennsylvania. When Rusty took a job in cybersecurity as a DOD contractor, Rusty and Amber moved to Edenton. Rusty’s job required him to make the drive to Norfolk or Suffolk with some frequency, but he was able to work primarily from home. This worked well for the LaJoies until Rusty’s work became exclusively home-based and they learned they were awaiting the birth of their second child. A bigger house became a necessity.

Because Rusty and Amber loved the Outer Banks, they decided to take a look at home ownership there, but prices and availability seemed to be working against them. Rusty’s parents, who owned a home in Elizabeth City, had been to Albemarle Plantation to play a few rounds of golf at our Sound Golf Links and suggested Rusty and Amber stop in to take a look. Rusty and Amber visited the Plantation several times to have a meal at our restaurants and get a feel for the community before deciding to seriously look at homes. After seeing three houses in one day, they decided on a home in the neighborhood of Berkeley where the 11th hole is just beyond their backyard. They moved into their home in January, just before Elijah was born, with Bradley and their pets, a standard poodle, a cockapoo and a kitty.

Rusty and Amber, who ran retail warehouses prior to caring for her growing family, are still getting acquainted with the neighborhood. Bradley was a big fan of our community pool last summer and can now ride her tricycle all the way from home to the children’s playground next to the tennis courts. In spite of a busy work schedule, Rusty has had time to fish and play some golf and hopes to get more involved with sailing and tennis. Amber keeps track of them all!

An unexpected result of Rusty and Amber’s home purchase is that Rusty’s parents, Russ and Jan, decided to move out of their home in Elizabeth City, downsize, and move into one of our Marina Condos. Rusty remarks that this is a “real super arrangement” because now potential babysitters are just about in Bradley’s “triking” distance.

When you have a chance to meet Rusty, Amber, their children, or Rusty’s parents, be sure to welcome them “home.” And don’t forget to ask the family fishermen, Rusty and Russ, where on the Plantation they catch the most fish.