by Albemarle Plantation | Dec 15, 2021 | Get to Know Your Neighbor, Neighbor Spotlight | 0 comments 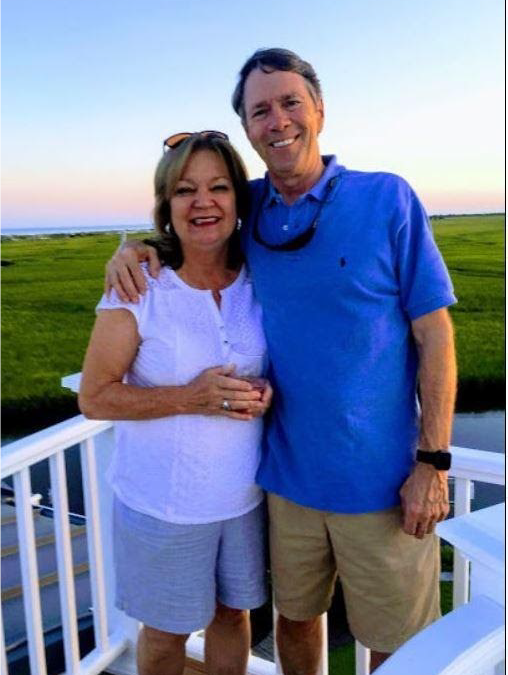 We had been searching on and off for some ten years to downsize and buy a one-story home someplace, but it came with criteria. For starters, I insisted we be “on water” somewhere and Al wanted a low maintenance home and yard. This new place also needed to be located within reason of our two offices in Williamston and Elizabeth City, but big enough for family visits. After raising three children (now adults) and selling our beach and mountain condos to follow our children’s lives, our quest began in earnest. Seemingly, nothing fit the bill after many futile searches.

The COVID isolation was getting to us, so we decided to visit the Outer Banks in May 2020. As we neared Hertford, Al pointed out that four of our employees lived at Albemarle Plantation. I was not familiar with the development, so on our return trip, we rode through the property. We both were mesmerized with the lovely homes, well-maintained grounds, golf course, tennis courts, marina, and Clubhouse complete with a pool. It was the beautiful view of the Yeopim River that probably began to cinch the deal.

Joe Minoski and his wife Gail later invited us to an amazing pizza dinner at their home, and the concept of moving there became even more of a real consideration. Everyone was so accommodating and welcoming. I even told Joe that I felt like the whole experience was staged and the residents were actors!

This possibility was quite a big step, so we booked a “Discovery Weekend” in June. After no luck in finding a home that checked all the boxes—Joe and Gail invited us to meet his brother and wife, Rick and Mary. As we drove onto Perquimans Court, there appeared this amazing vacant lot which garnered us speechless. Even though Al swore he would “never, ever build a house under my demanding standard,” it seemed to hopelessly take shape before his eyes. This property was the one.

Being successful with our offer, our lot developed into 126 Perquimans Court in the Fairview neighborhood on Hole 17. The groundbreaking began in November 2020. Our Williamston and Martin County friends, colleagues, family, employees, and especially our children, were very surprised by our decision to move to Hertford. Reality began in August this year upon the sale of our Williamston home and our last glance at our former lives. On to Albemarle Plantation, a.k.a., the adult playground!

Al was born and raised in his native agrarian town of Williamston, living the farm life filled with chores. This arduous way of life led to excelling in high school for the sole purpose of leaving and never returning to Williamston. Al was accepted at the UNC at Chapel Hill in 1973 and graduated from the Kenan-Flagler Business School in 1977. After traveling the USA, Al returned home and began to work with his uncle in the construction business, performing any and all laborious tasks until the death of his uncle. From his inherited tools and truck, Al started his own construction company in May 1981.

Forty years later, Al is the CEO and visionary of A. R. Chesson Construction Company, gainfully employing 43 employees, and winner of many building awards, including sixteen consecutive NCDOL safety awards. He has no plans to retire up until, like his uncle, his own demise. I am the company’s CFO and oversee all financial operations. Together, with our strong team, quality construction, integrity, and technology, we grew the company into the northeast NC and southern Virginia industry leader among similar contractors.

Born and raised in Goldsboro and later Shelby, North Carolina, I was educated at St. Mary’s College in Raleigh, and the Pan American Business School in Richmond, VA. Later I transferred back to Raleigh as sales office manager for a medical supply business. I met Al in Raleigh at a fraternity brothers wedding party. I was friends of the bride and by then had lived in Raleigh for almost a decade. A year later, Al and I were married in August 1984.
Al’s mother is the only parent/grandparent still alive and doing well at 85. Our children are Will, 34, a single dad who lives in Atlanta with our only grandchild, 2-year-old Shrad; Sara, 28, a 5-year AllState Corporate Recruiter; and Anna, 24, who works for a title insurance group in Raleigh. All three were educated also at UNC in Chapel Hill.

With our children’s independence in place, we are very much looking forward to enjoying the “AP Life.” We have joined the Osprey Yacht Club and the AP Travel Club and look forward to participating in other activities when work obligations allow. Traveling to “anywhere and everywhere we can” is on our radar. We have plans to visit Switzerland in June 2022 and plans are in the works to go on a Canada-Nova Scotia-Iceland cruise in 2023. I will be on a previously re-scheduled Viking “Girls’ Trip Cruise” on the Danube River in November.

We have declared, “Sometimes fairy tales do come true; it seems so for us. We are humbled and very grateful to be a part of this extraordinary community. How can we not with the beauty that surrounds us, the compassion of the residents, and the well-being we find here?”