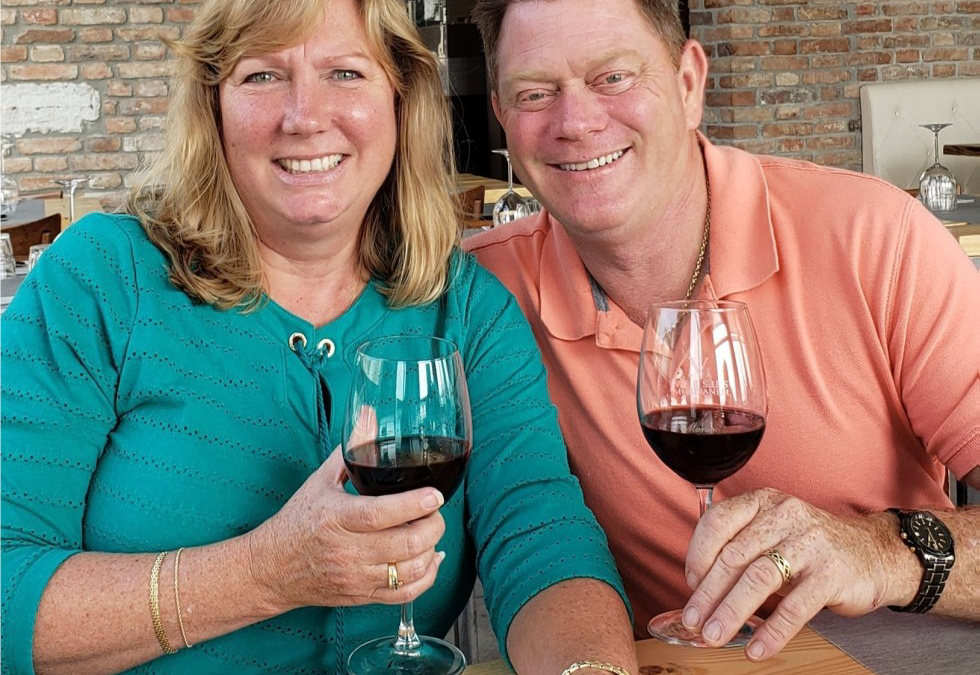 Did you ever wish that if you were going to move, you could take your great next-door neighbors along with you? Well, that’s exactly what Victoria (Torie) Butler and Dan Watts did! Here’s their story.

Torie was a government employee with the Department of the Navy working out of Patuxent, Maryland, when she received a postcard inviting her to visit Albemarle Plantation on a “explore package.” Along with her husband Dan, Torie had been looking for a retirement home in North Carolina because retiring here would allow her to take full advantage of the tax benefits provided to civilian employees retiring from the Navy.

Dan, working full time in D.C., agreed it was a good idea to come and see what the Plantation had to offer. Torie shared her plans with their nextdoor neighbors Cindy and Jerry Brown, and before long both couples had reserved a spot for an “explore package” for the same weekend.

The Browns’ and the Butler-Watts’ old neighborhood included a golf course with water features, so the Plantation felt like home the minute they drove through our gates. They looked at many homes, played some golf, talked with residents, and began to look seriously at the home options available to them. Before long, Cindy and Torie were sharing the news that they each had successfully put a contract on a home. But neither one was prepared to learn they both had new addresses on Morgana Drive! Although not right next door, the walk from one house to the other is a short one. Torie and Cindy were delighted to learn that moving would include bringing their good neighbors along with them.

Torie and Dan, along with cats Patches and Panda, moved into their home last November, and Torie fully retired on April 30 of this year. Although she is still adjusting to a retirement lifestyle, Torie has been busy re-establishing her photography business, Victoria Pictures, here. Since 2012 she has been talking pictures for family engagements and weddings, finding that she prefers taking pictures of people to still life and landscapes. Her recent photos here include shots for OYC events, including their sailing classes, and Historic Hertford. Now Torie is enjoying having the time to golf, entertain, and kayak, stating that her retirement goal is to “be outside and be physically fit.”

Torie and Dan are already members of the Sports Club and OYC, and Dan, who commutes to D.C. weekly, takes advantage of golfing and fishing when he is in town. In D.C., Dan, who has six years until retirement, keeps busy as a Woodcrafter employed by the Architect of the Capitol as a U.S. Government employee, maintaining and renovating the historic buildings on Capitol Hill. Both love to collect art and are always on the lookout for good red wines, with an impressive collection of corks they attribute to their hobby. Torie has two grown children in Maryland and two grandchildren ages seven and four.

One thing Dan and Torie love to do is travel and they are looking forward to traveling to Ireland in 2022 to explore Dan’s heritage. One annual trip they take is the 9/11 Motorcycle Ride in August, where all three 9/11 historic sites are visited with police escort. Another activity they are planning for this fall is attending two Renaissance Festivals, one in Crownsville, Maryland, and the other near Charlotte, North Carolina.

Torie and Dan were both avid fans of Renaissance Festivals long before they met and always attended opening day, complete with a period costume. So, in October 2018 when it was time for them to “tie the knot,” the perfect spot for this special occasion was the lovely chapel on the site of the Maryland Renaissance Festival where 70 guests, all in costume, witnessed their ceremony along with the 25,000 others who attended the festival that day. This year they will be attending the North Carolina Renaissance Festival to celebrate their third anniversary. Happy Anniversary!