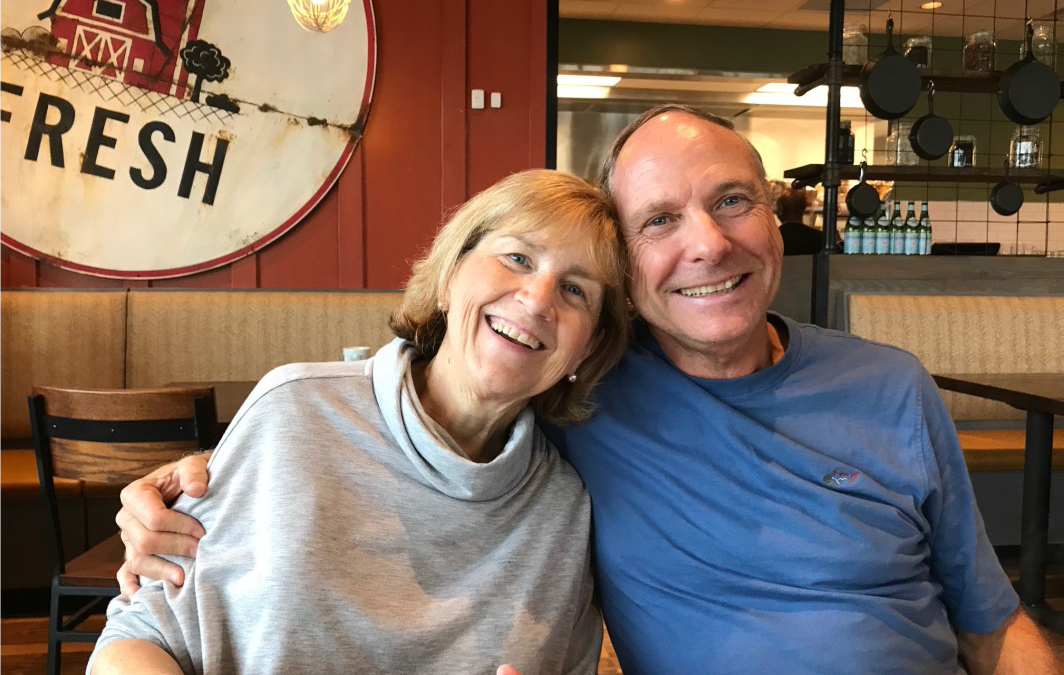 By: Frank and Fran

We spent about the last 40 years living in the Chesapeake and Norfolk areas, but shortly after our marriage in 1998, we were on a Sunday drive and stopped to take a quick tour of Albemarle Plantation. We were not ready to retire for a couple of decades, but we felt right at home from that first visit due to the beauty and overwhelming friendliness of the area.

Through the following years we looked at many areas up and down the east coast but could not find any place that had so many things on our checklist: golf course, beautiful scenery, great people, every possible activity. Fran wanted to be able to drive a golf cart around, so our new destination needed to be golf cart friendly. With our kids and seven grandchildren, ages 3 to 20, in the Camden and Virginia Beach area, the location here is just perfect for grabbing them for week-ends. We came down for a discovery tour with real estate agent Gail Brady and found a great lot in Fairfield that we decided was perfect.

But there were so many great houses for sale that we went back and forth numerous times. With the help of a VERY PATIENT Gail Brady, we finally started to build our new place in the summer of 2019 with Buddy White Contractors, who not once rolled his eyes at the jillions of Pinterest ideas Fran had collected that she was sure needed to be included in this home!

Fran spent 15 of her 30 retail years as owner/operator of gift shops in the Chesapeake, Virginia Beach, and Norfolk areas. One of the interesting high-lights was when a client hired Fran to make 100 nostalgic toy and candy-themed gift baskets to be given to the presenters at the Academy Awards! Fran then worked another 15 years as Women’s Wear Manager at Nordstrom MacArthur Center in Norfolk where every day was a new adventure. After retiring from Nordstrom, Fran worked part time from home for our son-in-law’s company in Virginia Beach, A Step In Time Chimneys. She plans to continue working a few days a week to support her Amazon and Homegoods shopping habits!

Frank had an unusual career in the Navy because he spent his entire career in Norfolk except for a two-year move to Hawaii. He graduated from the U.S. Naval Academy in 1975 and became an aviator in 1976. He flew SH-2F Helicopters, had four squadron tours, and was the last commanding officer of the HSL-32 before they were decommissioned in 1994. He served as Air Boss onboard USS WASP and retired in 1999 with 25 years of service. Frank then began a career supporting the Navy as a Senior Training Analyst, preparing Carrier Strike Groups and Amphibious Groups for overseas deployments. He is quite excited to have completed his last work-related commute to Norfolk on June 25, 2021, and can now truly enjoy the AP life.

We are a blended family of three daughters, one son, and seven grandkids. We wanted our house to be a place they would want to visit, so we incorporated as much kid-friendly fun as we could. Adam is three and he loves his Toy Story cubby and runs to see what is new with each visit. The older kids are big Harry Potter fans, so we gave them a special Harry Potter bedroom space to call their own, which they eagerly call dibs on before each visit.
Frank is looking forward to improving his game of golf and has recently tried pickleball, which he really likes. We enjoy playing games and cards and are trying to find a few more people to play a game we love called California Rummy or I’ll Buy. Fran loves crafty things, and all it takes is a trip to Hobby Lobby and she is ready for her next venture. She included a task room in the house, which is home to laundry, an office, and best of all, a space for her crafting stuff. Here all the crafting supplies are carefully hidden away from the eyes of anyone who just might not understand the need for such a continuing mess.

AP activities Fran is really enjoying are bocce ball, water aerobics, pickleball, and Bunco. We recently bought our first kayak and are learning to navigate the AP waters. We also just joined the OYC and will gradually pick up more activities now that Frank is retired for good. We would like to do some traveling, maybe to New England and Canada in the next couple years, and also visits to Frank’s family in Sarasota. But we really enjoy short getaways to areas in the Mid-Atlantic states. The problem is that there are just so many things to do that it’s hard to know where to start.
We are excited to be living in this community surrounded by kind, friendly, and fun people. We will never take for granted our community’s beautiful set-ting, because it makes us feel like we are on vacation each and every day. And Fran says her goal in retirement is perfecting her recent new word of the day, “spuddle.” This 17th century word means to work ineffectively, to be extremely busy whilst achieving absolutely nothing!