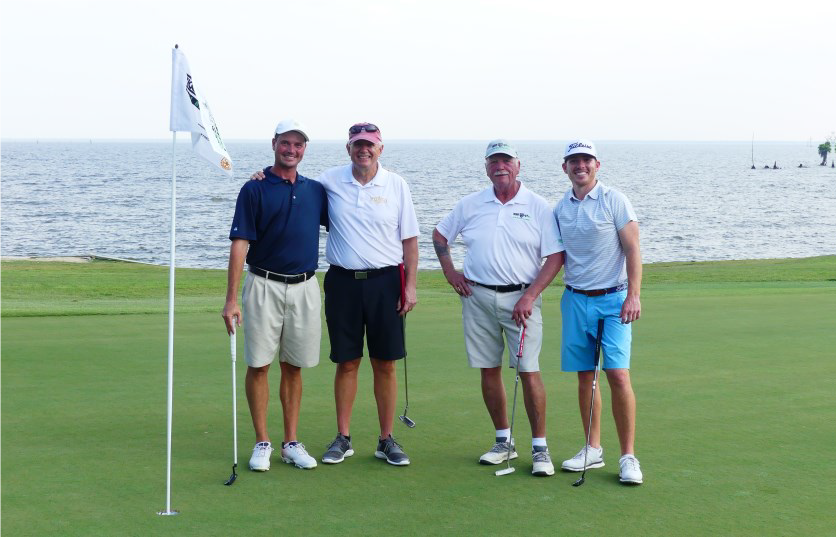 After an enforced hiatus in 2020 caused by COVID-19, we welcomed back the professional golfers of the G-Pro Tour to our Sound Golf Links at Albemarle Plantation. And they were greeted with summer-like temperatures and perfect course conditions.

The week began with two Pro-Am’s and an alternate shot Pro-Am Shoot-Out won by our own Walt Smith and his pro partner, Thomas Bass. Then on Thursday, we saw 117 aspiring young professionals eager to get on the course for the three-day stroke play competition that offers the biggest purse on tour this year, with the winner receiving a check for $20,000 along with the trophy.

We all know that warm weather brings with it unpredictable, swirling winds, particularly from midday onwards. So, the early tee times gave players a chance to “go low” and set the mark for others. And that’s what Lukas Euler (Scottsdale, AZ) and Dylan MacQueen (Palm Harbor, FL) did, posting matching 7 under par rounds of 65. In the afternoon, players faced a more demanding wind and heat, but five players posted 67’s including Akshay Bhatia (Wake Forest, NC) and Blake Kennedy (Hilton Head Island, SC) teeing off at the back of the field and finishing late in the afternoon.

The second day produced very similar conditions, but the tee times were reversed to level the playing field. And two players took full advantage. Akshay Bhatia and Bryson Nimmer (Okatie, SC) both played early and shot “lights out,” setting a new course record with a pair of 62s. But they were chased by Mookie DeMoss (St. Simons Island, GA) and Carson Young (Pendleton, SC) who both posted 8 under 64’s to be within 3 shots of the leader. Wow, these boys know how to play!

Saturday, the final day, threatened thunderstorms in the afternoon, so the top 43 players who made the cut teed off beginning at 6:30 a.m. and were allowed to use carts to speed up play. Lukas Euler, in the third to last pairing, set a torrid pace and posted a leading 20 under in the Clubhouse. After an hour-long stop-page for bad weather late in his round. But Akshay Bhatia, who was playing another solid under-par round, came out of the rain and thunder delay firing on all cylinders. He birdied holes 16, 17, and 18 to run away with the victory. His playing partner, Bryson Nimmer, tipped his cap and shook the new champion’s hand as they walked off the 18th green to warm applause from the spectators packed on the Clubhouse veranda. And Akshay’s total score of 24 under par was a new tournament record for the BIGGS Classic!

Lee Duncan, the Tournament’s Master of Ceremonies, thanked the ground staff, the Pro Shop, and the Clubhouse staff for all their hard work and introduced Sam McNaught who presented this year’s $5,000 Bruce BIGGS Scholarship to Holly Rome, a senior at John A. Holmes High School in Edenton who will attend East Carolina State University to study Nursing.

Then Lee passed the mic to tour director Gary Haugh who choked back some emotion as he warmly thanked the staff, housing hosts, and the spectators for making the tournament the very best of the Tour sea-son. He then presented the trophy and a bottle of champagne to 2021 Champion Akshay Bhatia who will also receive a nice check for $20,000!

It was another wonderful example of our community’s ability to embrace the big event, and we can all be proud of the outcome.