GET TO KNOW YOUR NEIGHBORS: Frank and Linda Seemar 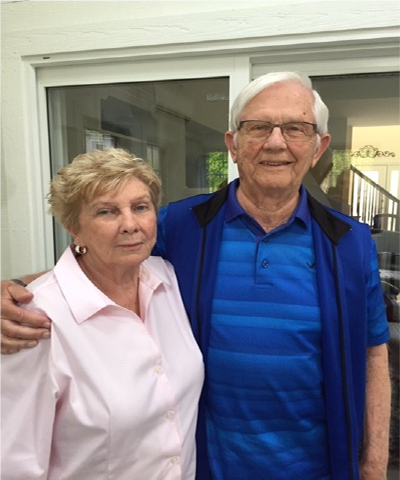 Linda Seemar grew up in Coeburn, a small town in southwest Virginia’s coal country. She must not have wanted to live there forever, because while a senior in high school, she passed a Civil Service test that guaranteed her a job in Washington. Off to DC she went right after graduation. Four weeks later, she was working as a secretary for Army Maps when her roommate introduced her to a 28-year-old law student named Frank, who happened to be the roommate of her boyfriend. Three months later, on October 6, 1960, Linda married that law student. She was only 18.

Thus began a marriage that has lasted 60 years, a partnership that never seemed to find a permanent home until the day in 2000 that Linda and Frank Seemar drove past the gates of Albemarle Plantation, and Linda declared that this was the place she wanted to settle down—at last. Frank had no choice but to agree. In 2001 Frank and Linda moved into their new home on Wando Circle and have enjoyed AP life to its fullest ever since.

Frank Seemar was admitted to the Connecticut Bar in 1965 at the age of 33. What took him so long? Probably because he didn’t know what he wanted to be when he graduated from high school in New Canaan, Connecticut, in 1950. He joined the Coast Guard and soon found himself assigned to a weather patrol boat out of Staten Island, New York. The Coast Guard recognized that he had an aptitude for electronics, so it sent him to Groton, Connecticut, to study aviation electronics (radio, radar, etc.) and then in 1951 to the CG’s electron-ics school in Elizabeth City.

Frank served three years in the Coast Guard, but that was long enough to qualify for the GI Bill, which enabled him to study at the University of Connecticut and earn a degree in electronics engineering. That got him into a training program with GE where he learned all about advanced electronic systems in Polaris and Atlas missiles. But then something strange happened: it dawned on Frank that he did not like engineering! What really interested him was innovation.

One thing led to another, and soon Frank found himself working for Bendix in Baltimore while studying patent law at night at George Washington University. It was during this time that Frank met Linda. But no soon-er were they married, Bendix sent Frank to Hawaii to work with NASA. Six months later he was back and resumed his studies at GWU. He then went to work for the U.S. Patent Office and eventually earned his law degree in 1964.
Armed with his new diploma, Frank was hired as a patent attorney by Sperry Rand in Norwalk, CT. For the next 32 years Frank lent his expertise to the company’s various re-incarnations in Ohio, Pennsylvania, and elsewhere until he retired in 1996 and went into private practice. Five years later he retired for good, and Albemarle Plantation welcomed him and Linda with open arms.

Linda got involved right away by co-chairing AP’s Social Committee for five years. Frank joined the Osprey Yacht Club and shared ownership of a pontoon boat for seven years. He also joined the Sports Club and served as its secretary for a year. He became a member of Sound Golf Links and the men’s golf league, and is an active participant to this day.

Over the years, the Seemars have traveled with other AP residents to places like Alaska, Peru, Bermuda, and the Caribbean. They’ve also cruised the Rhine and sailed the Baltic all the way to St. Petersburg. Unfortunately, Linda has developed ear problems that prevent her from flying, but that doesn’t prevent the Seemars from driving north to see their daughter Melinda who is a prosecutor for the city of Portsmouth or their son Frank who is Assistant Principal for the Sewell’s Point school district in Norfolk. Even son Kurt, a Charlotte businessman, is not far away.

Three Seemar grandchildren are Frank’s daughters Alexandra, studying at Brown University on a full scholarship, and Emily, a senior in high school; Benjamin, Kurt’s son, lives a bit farther away in Georgia.

Linda is an active gardener, but her favorite pas-time is going dancing with Frank. They were enthusiastic shag and line dancers when Covid spoiled the fun. They hope to resume cutting a rug soon.

Meanwhile, Frank and Linda still enjoy their membership in OYC even though they no longer own a boat. Why? “We like the parties.”

And that’s what life on Albemarle Plantation has been for the last 20 years: a long, wonderful party. Linda was exactly right when she first came through our gate and said, “This is where I want to live.”