GOLF NEWS: Battle of the Boulevards Ryder and Solheim Cups 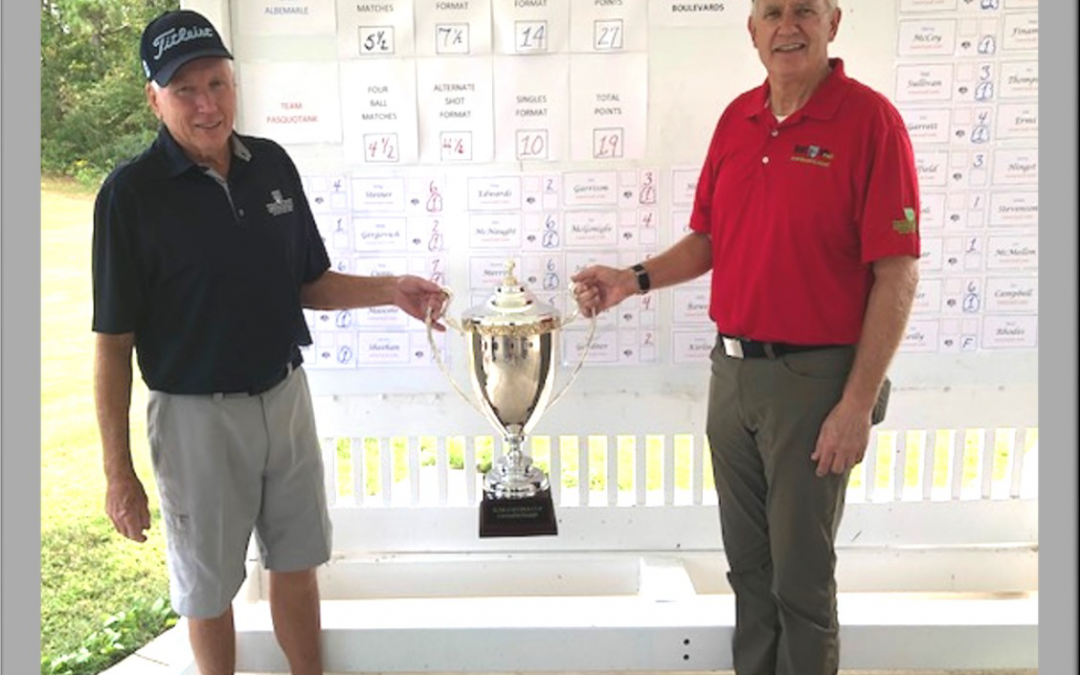 A beautiful week of weather (October 5 through 9) welcomed this year’s annual Battle of the Boulevards for our men and lady golfers from the Albemarle and Pasquotank Boulevards. These competitions were postponed from May until October due to COVID restrictions but the weather turned out to be 10 out of 10 and more than justified the delay. Pep rallies were held on the Friday before (for the men) and Monday evening (for the women). The ladies’ teams resorted to a team song and an enthusiastic group cheer to gin up their players prior to battle!

The men kicked things off on Monday with 10 four ball match play matches that were keenly fought and resulted in a narrow 1-point advantage to the Albemarle team, 5 ½ to 4 ½. The ladies followed on Tuesday with a two-player scramble format with 9 matches being contested. Again, Albemarle nosed ahead by day’s end, 5 points to 4. Captains Sheila McGauvran (Albemarle) and Janet Sandeen (Pasquotank) were clear that anything could happen during the second day on Thursday.

The men turned out as two-man teams again on Wednesday to play a modified alternate shot format with 12 matches scheduled. When the day concluded, the “Albemarlians” had increased their lead to 4 points over the “Pasquotankians.”

The ladies followed on Thursday with their second and final round playing 9 four-ball matches. The Pasquotank ladies gave their opponents plenty to think about and managed to square the day, 4 ½ points to 4 ½. But the single point advantage gained on Monday left the Albemarle team as victors, and they retain the cup in 2020.

On Friday, the final day for the men, the Pasquotank side, led by Tom Cupps and Ed Mascolo, were primed and ready (in red) to give their opponents (in blue) a scare. Albemarle captains Sam McNaught and Tom Tetlow encouraged their troops not to let their guards down. 24 singles matches were at stake. Well, the words spoken by the Albemarle captains resonated with their men. Honestly, I didn’t hear what they said because I was talking…Ooops! The “blue crew” stamped their authority on proceedings with a solid 14 points to 10 win and so secured the cup for Albemarle with a three-day total of 27 points to Pasquotank’s 19.

Many thanks to Fred and Joyce Wilden, Wayne and Kathy Applemann, and Ed and Kim Mascolo for hosting après golf parties at their homes on Monday, Wednesday, and Friday. Thanks too to Ed and Tyler in the Pro Shop for their impartial administration. And finally, a big thank you to all who played and again made this annual Battle of the Boulevards tournament such a huge success.