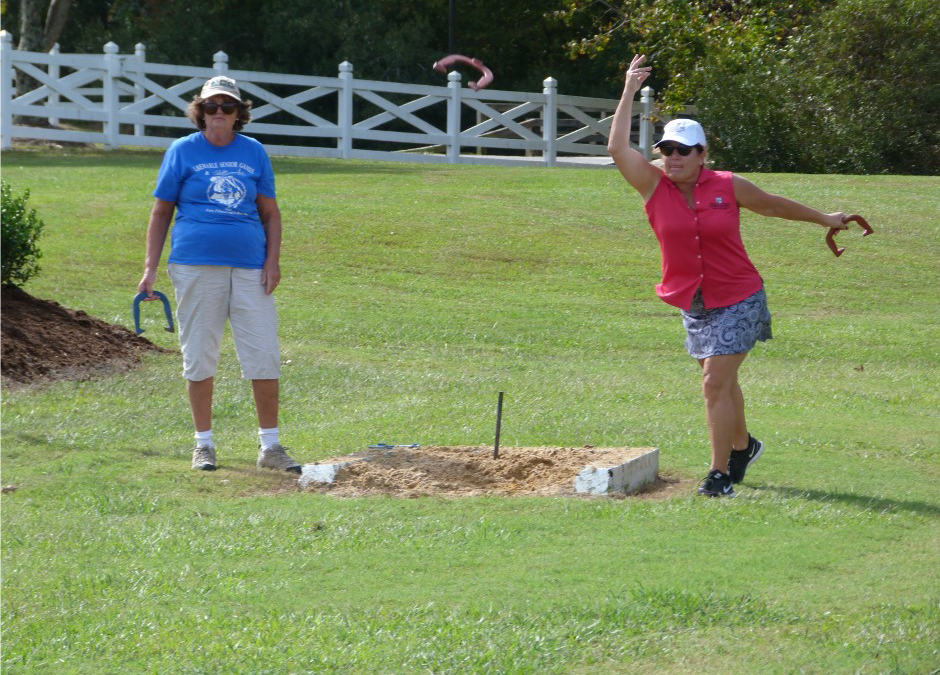 We were pleased to have a gorgeous day to hold our Sports Club Olympics this fall. Over 30 participants competed in various sports, including both women’s and men’s bocce, horseshoes, and cornhole. We also had men’s and women’s table tennis and cornhole competitions before COVID hit in the spring.

I have to say the biggest challenge was using the regulation horseshoe pits. You don’t think it’s that far until you have to throw the horseshoe at a small iron post from 40 feet away. The distance seemed to grow with each round. Debbie Gaudreau, however, rose to the challenge, cruising on to victory for the women. Kevin Jackson, followed closely by Reg Criffield, led a challenging field of men’s horseshoe competitors.

Bocce was more my style. I had never played bocce until I came to Albemarle Plantation, but the ladies were very accommodating and always willing to teach anyone who wanted to come out on Mondays to learn. Seven women competed at bocce. Fierce competition came down to a close final match between me and Barbara Mueller for first place. Ultimately, I was able to hold her off. Bocce winner for the men’s competition was Keith Rogers, a fairly new Albemarle Plantation owner and Sports Club member. The bocce courts are regulation courts used for the Senior Games. They are maintained each morning by our wonderful grounds crew. It was nice that they had just planted flowers around each court just in time for our competition. If you haven’t tried the bocce courts while here, give them a try soon as they are open to all owners. Hopefully, we will see you next year at the Sports Club Olympics.
The last event was cornhole. No introduction is needed for this game. More people signed up to play cornhole than any of the other sports. We had a wom-en’s, men’s, and mixed doubles cornhole competition. We were lucky to have had such a beautiful day with temperatures in the low 80s. And, of course, we had beverages to celebrate the games and camaraderie following the completion of the events. It was just nice to get out in the sunshine and have some fun after a tough spring and summer.

On Monday, October 26th, the Annual Sports Club Dinner was held with awards presented to the Olympic athletes for a job well done. 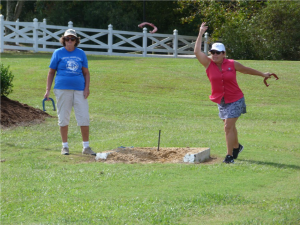