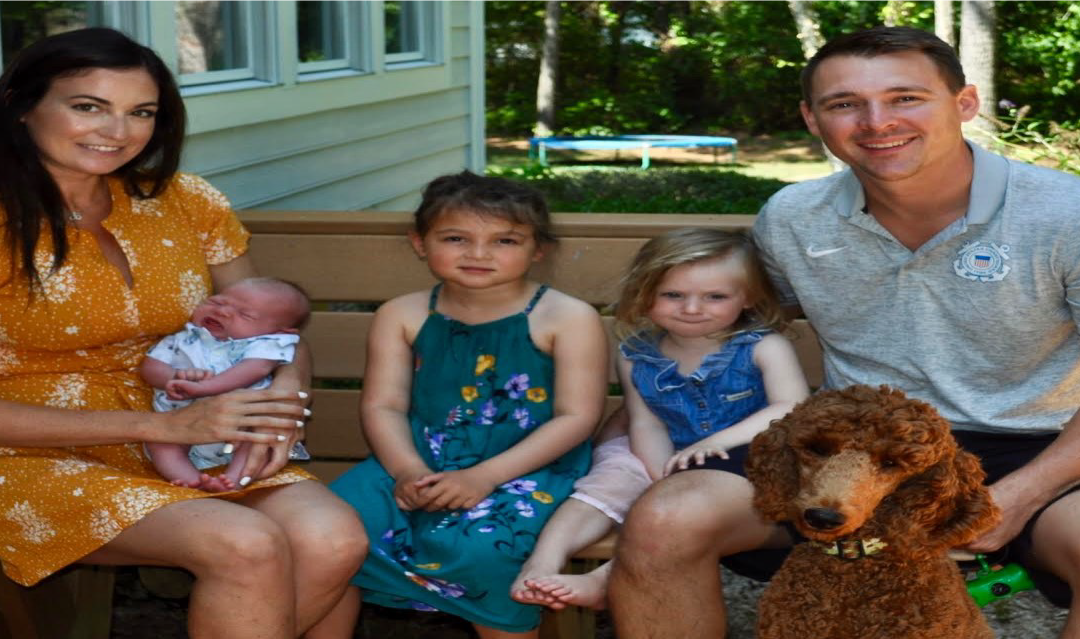 Albemarle Plantation now has its very own Yankee Doodle Dandy, born on the Fourth of July. Master Carson Jack Lyons (hereafter known as “CJ”) arrived at 7:40 p.m. that evening. Mom Jill, anxious to end 41 weeks of waiting, had gone for a long walk that morning and was hitting golf balls with her mom until 4:00 that afternoon, when they came indoors to dodge a thunderstorm. Then, the contractions began. Dad Mark rushed her to Vidant Chowan Hospital, where CJ arrived a little later, weighing 9 lbs., 1 ounce and measuring 21 inches—quite a firecracker baby!

Our Lyons family story began on the Grand Strand of Myrtle Beach, where Jill and Mark met when both were out partying with friends. Jill, a native of Syracuse, New York, who had grown up spending school breaks and summers there with her grandparents, was a Health & PE major at Coastal Carolina at the time. Mark and his family had moved to Myrtle Beach from Ashland, Kentucky, when he was in middle school. He had joined the Coast Guard right out of high school, had been stationed at Cape May and Clearwater, and was preparing to ship out for Kodiak Island, Alaska, when he met Jill.

The two maintained a long-distance relationship for the next 18 months while Jill finished college—thank goodness for cell phones and FaceTime. They were married in 2014, and their older daughter Sadie was born on Kodiak in 2015. Shortly afterwards, the family moved to Elizabeth City where Haley was born in 2017.

The Lyons family moved to Albemarle Plantation in June of 2019 after purchasing the former home of Jane and Harry McCoy on the twelfth fairway. Mark and Jill were attracted to the community first by the golf— both are avid golfers. Of course, Jill hasn’t had a chance yet to “show her chops,” but is looking forward to joining the SLWGA in the near future. As Jill and Mark played the course on numerous occasions, they began to appreciate the beauty, serenity, and sense of security of this place, as well as the friendliness of the residents.

When Mark re-upped, and they knew they would be stationed in Elizabeth City for several more years, they decided this was the only place they wanted to live. Jill had been recruited to Arbonne Corporation as a sales consultant in 2017, quickly becoming a regional vice-president (in ten months) and then a national vice-president (in 18 months) involved in sales and training, a position which enables her to work from home.

With a little luck, Mark, who has only two years to go before he can retire, will be able to “homestead,” and the family will not have to move again. In the Coast Guard world, Mark is an Aviation Maintenance Technician with a flexible work schedule over the past several months due to the pandemic. Mark became well-known in our golfing community when he and one of his work buddies won the 2019 Member-Guest championship.

Jill, Mark, and the children have received a lot of family assistance over the past several weeks, as Jill’s mom, along with one of her sisters as well as one of Mark’s (and three family dogs) have been in residence to assist both before and after CJ’s birth. CJ is reportedly a “good baby” who is doted upon by his big sisters and has smiles and coos for everyone.

Let’s all join the recent weather in giving a warm welcome to our youngest resident.