The AP Dog Park project has begun. After the January approval of the Dog Park project by the APPOA and the ARC, a team of volunteers are leading the construction of the Dog Park fence project. On March 7th, 15 of them met for the first time at the Community Center, and in a well-planned and organized fashion, formed an assembly line to create finials for 114 posts. Joe Minoski had designed a jig to make finials for the posts that would become not only the base for the fenced-in area of the large- and small-dog parks, but also be fashioned in the style of the existing fence that surrounds the Plantation Estates.

Something different happened in AP while our world was experiencing very serious health challenges: a group of individuals came together as a team with a special energy that produced a new excitement. There was a momentum, a camaraderie, and full cooperation that energized the group and let them forget, if only for 4½ hours, what our society is experiencing. They were efficient in rotating tasks that made this first part of the project a smooth sail.
Here are a few photos captured during their work together. Contributing their time and skills are (L-R): Dean Engelhardt, Nick Calabro, Bob Escheman, John Pynn, Tom Lampley, Dick Zimmerman, Mike McGauvran, Dave Smith, Joe Minoski, Art Honeycutt, and Victor Modic. Miss-ing from the photo are Bob Petersen, Bob Cotthaus, Fred Levine, Sheila McGauvran, and George Mara who also helped, but were unavailable for the picture. 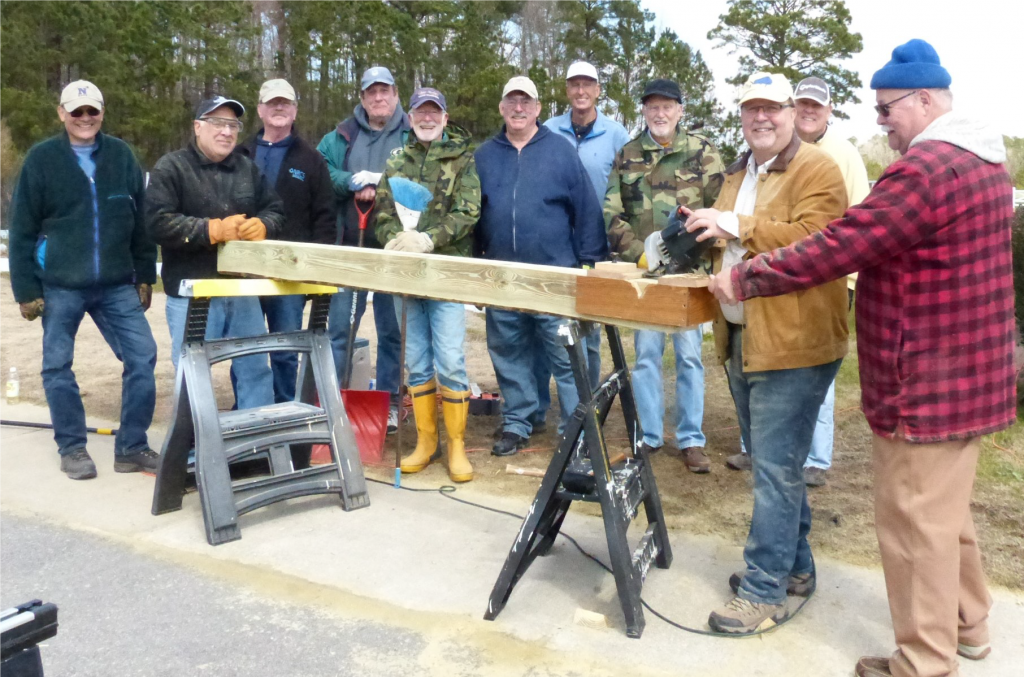 The next step was to install the posts. On March 17 and 19, the Alonzo Fence Company installed each post into holes, each filled the holes with two bags of Sakcrete. If you haven’t already noticed the posts erected to the right of the Community Center, we encourage you to check them out. All the costs of material and labor were covered by the generous contributions from AP residents.

Next, the construction project committee met on March 21 to plan the cutting and installing of fencing rails to blend in well with the existing fence outside the AP Community Center. The committee also considered precautionary safety steps in keeping with the CDC recommendations. Dick Zimmerman, head of the Ad Hoc Committee for the AP Dog Park, will ensure that the work meets CDC guidelines. The construction committee agreed to build a few initial portions of the fencing at the end of March to determine the safest and most efficient procedure for installing the fence rails. Once this was determined, two or three teams continued with the fence construction.

Thank you to all the volunteers! Those who ex-pressed an interest in helping and are waiting to be contacted will eventually be called to participate. A Dog Park project is multifaceted, and with that come many areas of need. The commitment of all the volunteers -both active and standing by- is sincerely appreciated.