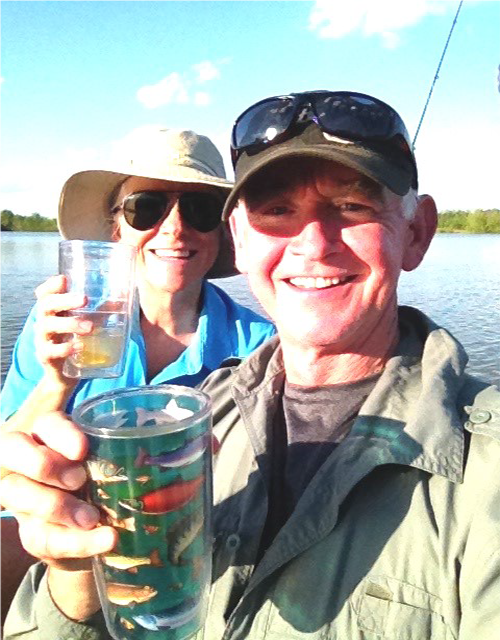 Have you ever wondered if people who spend years commuting into our area for their jobs ever decide to retire to Albemarle Plantation? They do! Meet Manua and Gary Lehman, the newest residents on Meherrin Drive.

After graduating from the Pennsylvania College of Optometry in 1974, Gary enlisted in the United State Navy and was stationed in the health clinic at the Norfolk Naval Base. After his dis-charge, Gary joined the practice of eye doctor Dr. Mike Gilbert of Elizabeth City and in 2002 relocated his practice to The Albemarle Eye Center. Throughout his medical career, however, Gary continued to live in Great Bridge, Virginia, and commuted every day along Canal Bank Road into Elizabeth City.

Manua owns and operates Sew Fine Designs on North Road Street in Elizabeth City and is the creative force behind the alterations, slipcovers, and draperies that are a big part of her business. “If it can be done on a sewing machine, I’ll try it,” laughs Manua. Born in Alabama, Manua was named after her mother’s best friend, a Hawaiian. But Kodiak, Alaska, was where Manua grew up, thanks to her parents’ employment with the Coast Guard station there. Her training in merchandising and design eventually took her to Atlanta and London, but Manua finally settled down in Elizabeth City and set up shop.

It was there, in Elizabeth City, that Gary, who describes himself as “boring, plain vanilla” met Manua, “the fun loving, outgoing, talented one.” They met in a spin class at the YMCA, and Gary finally worked up the courage to speak to her. But it was Manua who called Gary to see if he might want to meet her some day for lunch. Gary feigned forgetting his lunch and met her a few hours later at The Pines Restaurant. After multiple adventures while fly-fishing, biking in the mountains, and kayaking, they were married in the Biltmore Inn’s outside veranda in Asheville, NC. Gary wore a navy blue wool suit Manua designed and made especially for him, a “labor of love.” Soon Manua and Gary were daily commuters along the “treacherous” (Gary’s description) Canal Bank Road into Elizabeth City.

But that arduous commute was not to last. The Lehmans began to think about relocation with a gradual retirement plan guiding their decision-making. Albemarle Plantation attracted their attention both for its location and its amenities. In fact, Gary commented that Albemarle Plantation seemed to be “the ideal place.”

Through his practice, he had come to know that many of his patients lived here and “all spoke very highly of the place.” Lovers of kayaking, fishing, and golfing, the Lehmans also wanted to be close to their melded families of three daughters, one son, and two grandchildren, who all live about an hour and a half away.

Now settled into their home on Meherrin Drive with their two chocolate labs, the Lehmans are easing their way into retirement by gradually cutting back on their work hours and spending more time getting involved in our community. Gary has gotten involved with the “polishing the brass” initiative, and they are new members of the Osprey Yacht Club and gourmet dinner clubs. Manua, who loves dancing, is enjoying exercise and line dancing classes, and Gary, who loves fly fishing, has been spotted a few times out on Frank’s Creek fishing from his kayak. Their new goals include finding more time to golf and fish, fix up the house and yard, and enjoy their nice neighborhood. “We are up for everything,” Gary commented about their active lifestyle.

How lucky it is for us that the Lehmans are bringing all their wonderful energy to work and play in our neighborhood. Welcome home, Manua and Gary!